On this page you will see the progress of construction and upgrades to the Accomack County Airport.

The paving schedule at the Airport was temporarily interrupted due to an emergency road repair in upper Accomack County.  Production paving is anticipated to resume Nov. 29 and the project remains on schedule.

The wiring for the runway lights and navigational aids (NAVIDS) is complete as well as the concrete pads for the Runway End Identifier Lights (REILS) and the Precision Approach Path Indicator (PAPI).   There are 67 runway lights and six taxiway entrance lights for a total of 73 fixtures.  Approximately 17,000-ft. of wiring has been installed for the runway lighting, with another 18,000-ft. of wiring for the low voltage NAVAIDS that include three windsocks, two REILS, and two PAPIs.  The runway lights idle at low intensity after dusk and are pilot activated via a radio controller to increase the intensity to medium or high for approximately 15 minutes before dimming.

The new LED REILS are installed and the PAPIs are expected to be delivered in early December.   The high demand for LED runway lights and a manufacturer’s shortage of circuit boards has caused a delay in the installation of the new runway lights.   In order to prepare the runway to open on schedule, the old runway lights have been temporarily installed until the LED fixtures are delivered.

Once the paving is complete, work will begin on the temporary runway markings that include the aiming points, centerline, threshold marking and bars, runway numerals, taxiway centerline/lead-in, and the runway edge markings that were removed during the milling process.   The chevron and hold line markings have been eradicated and will be remarked along with the temporary runway markings.  The chevron markings are used to show pavement areas aligned with the runway that are unusable for landing, takeoff and taxiing, which are located past the runway threshold.

The temporary runway markings are a single coat of non-reflective paint that may appear very light.   The FAA requires 30 days for the petroleum by-products in the asphalt to dissipate enough for the permanent application to adhere properly.  Once the pavement has cured, a second coat of paint containing the reflective glass beads will be applied. 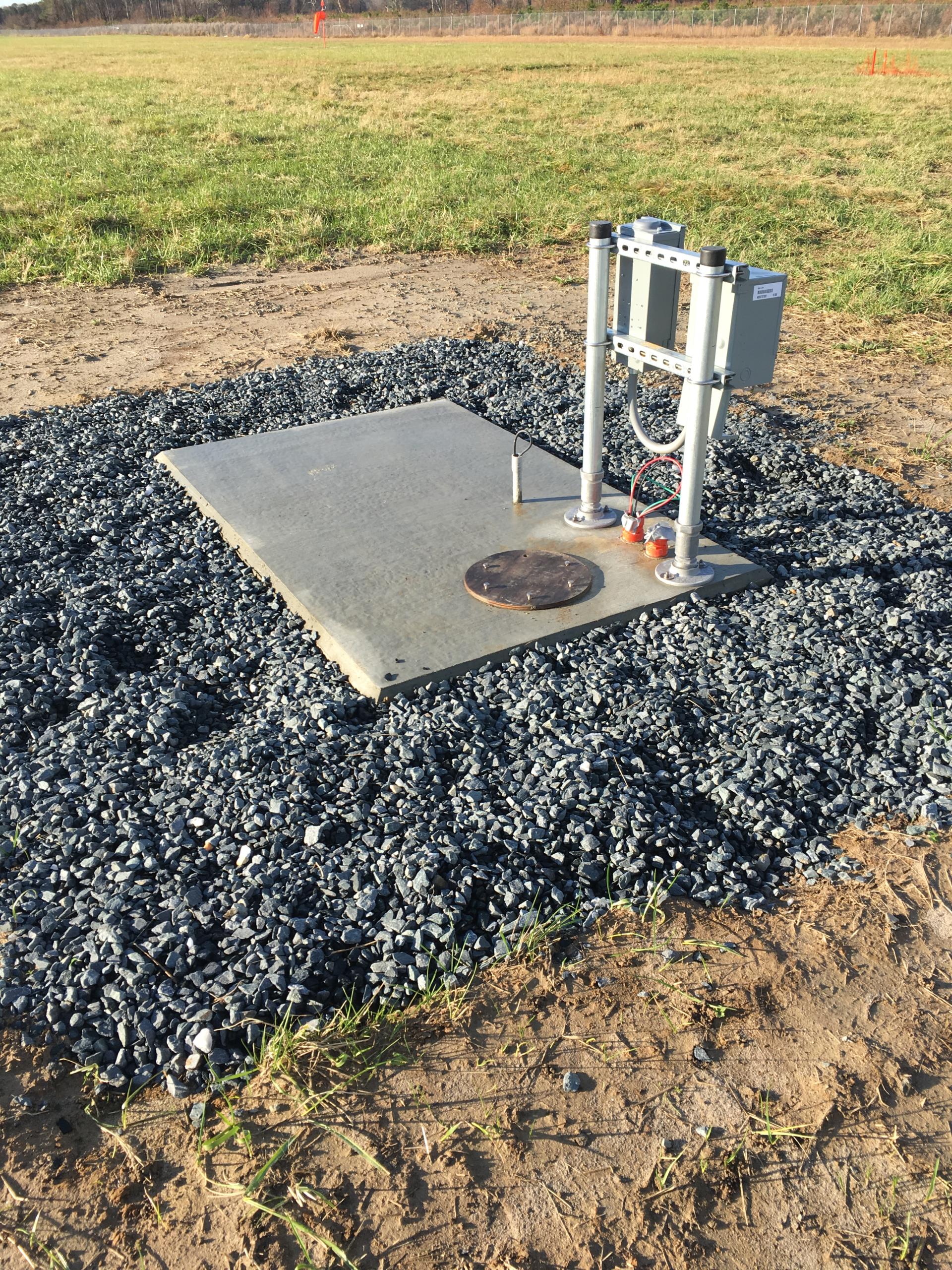 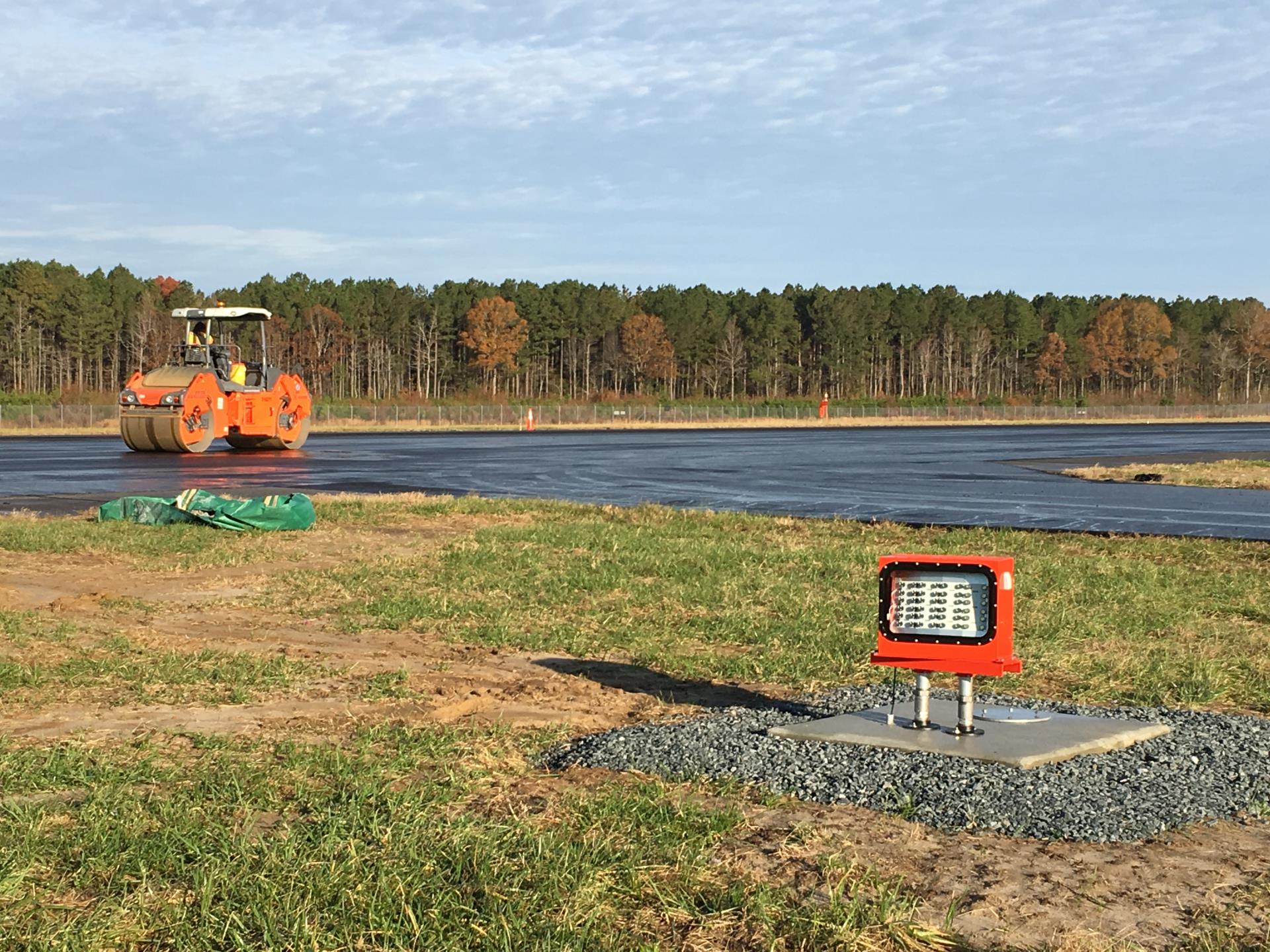 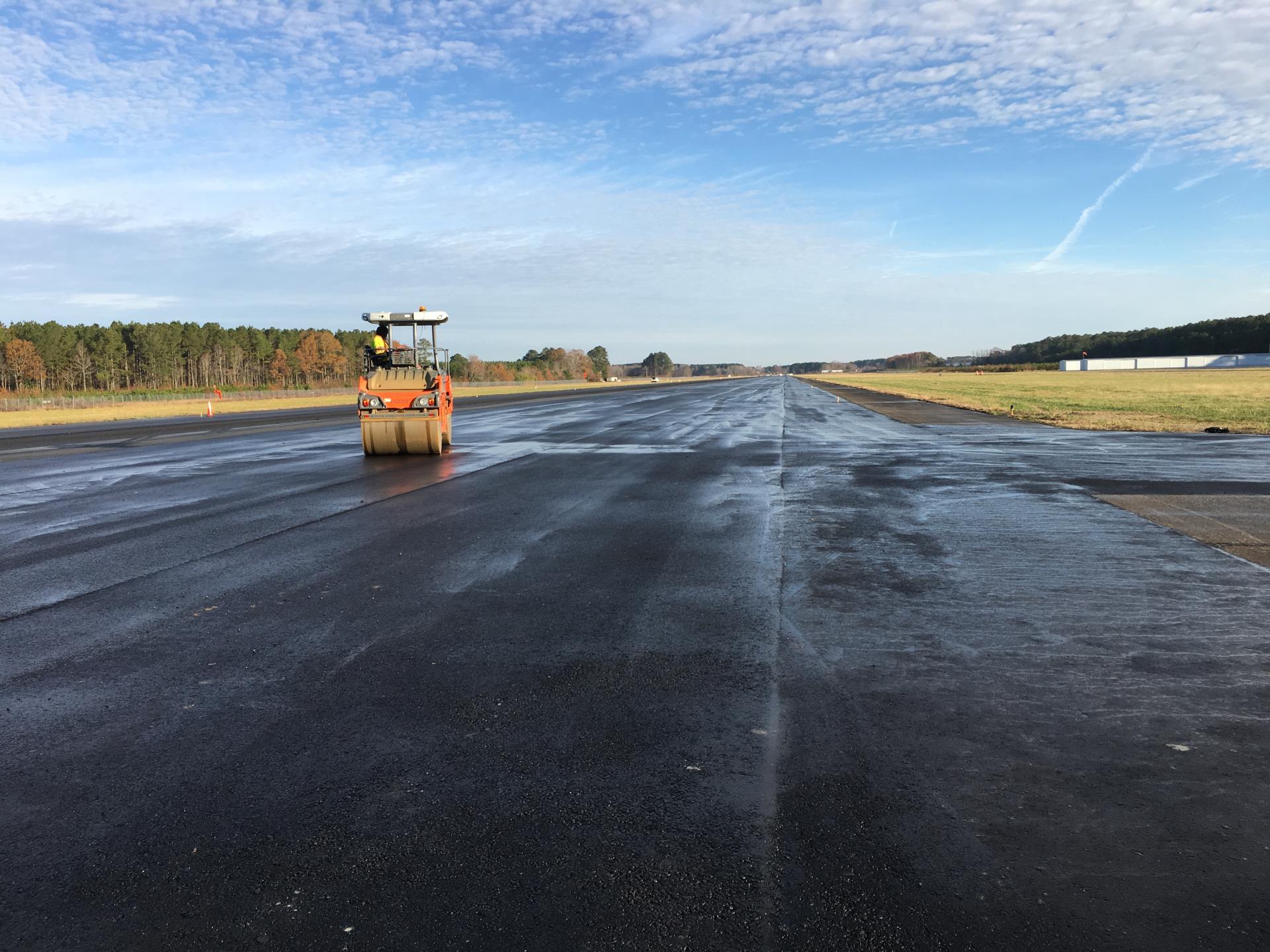 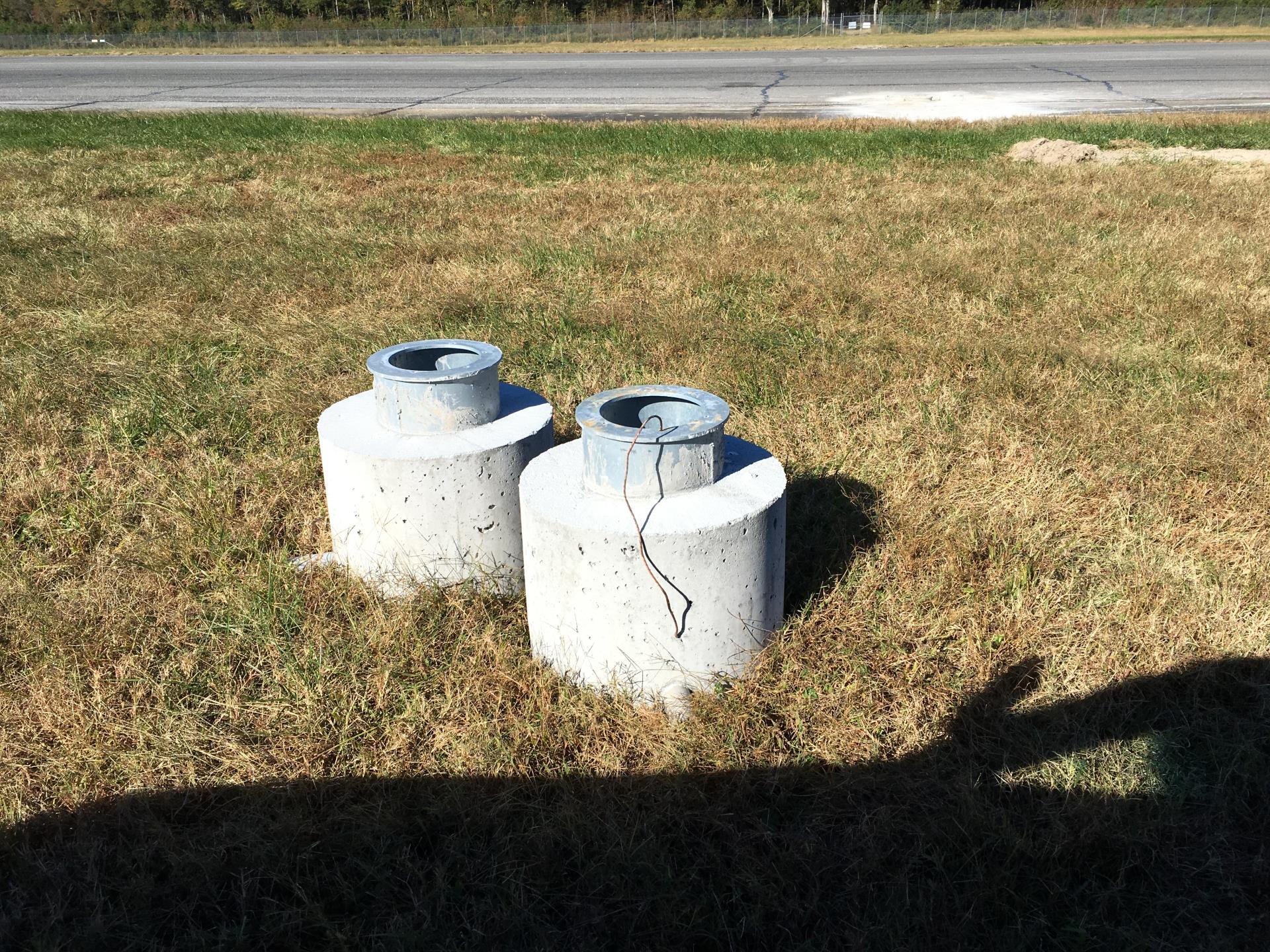 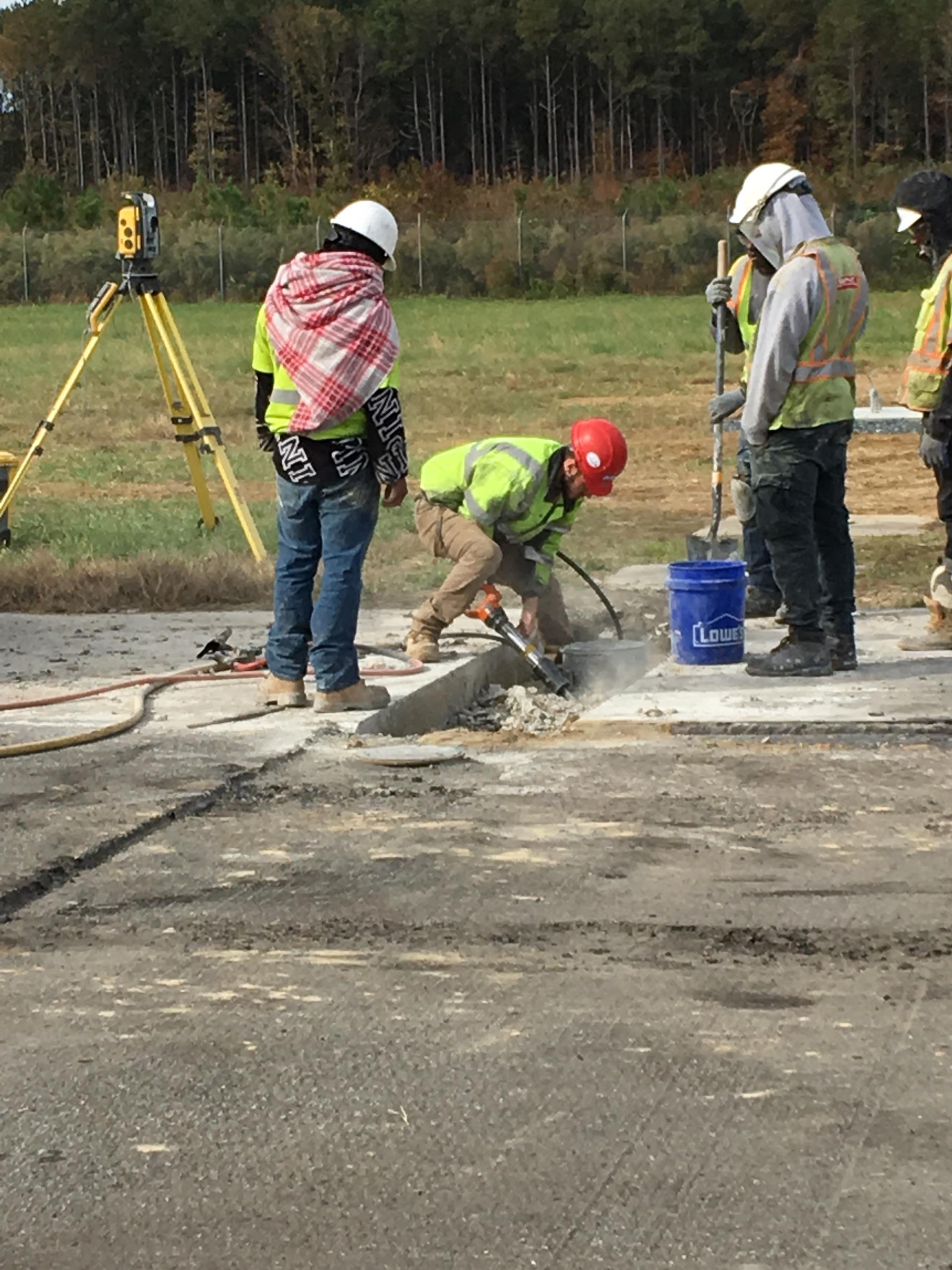 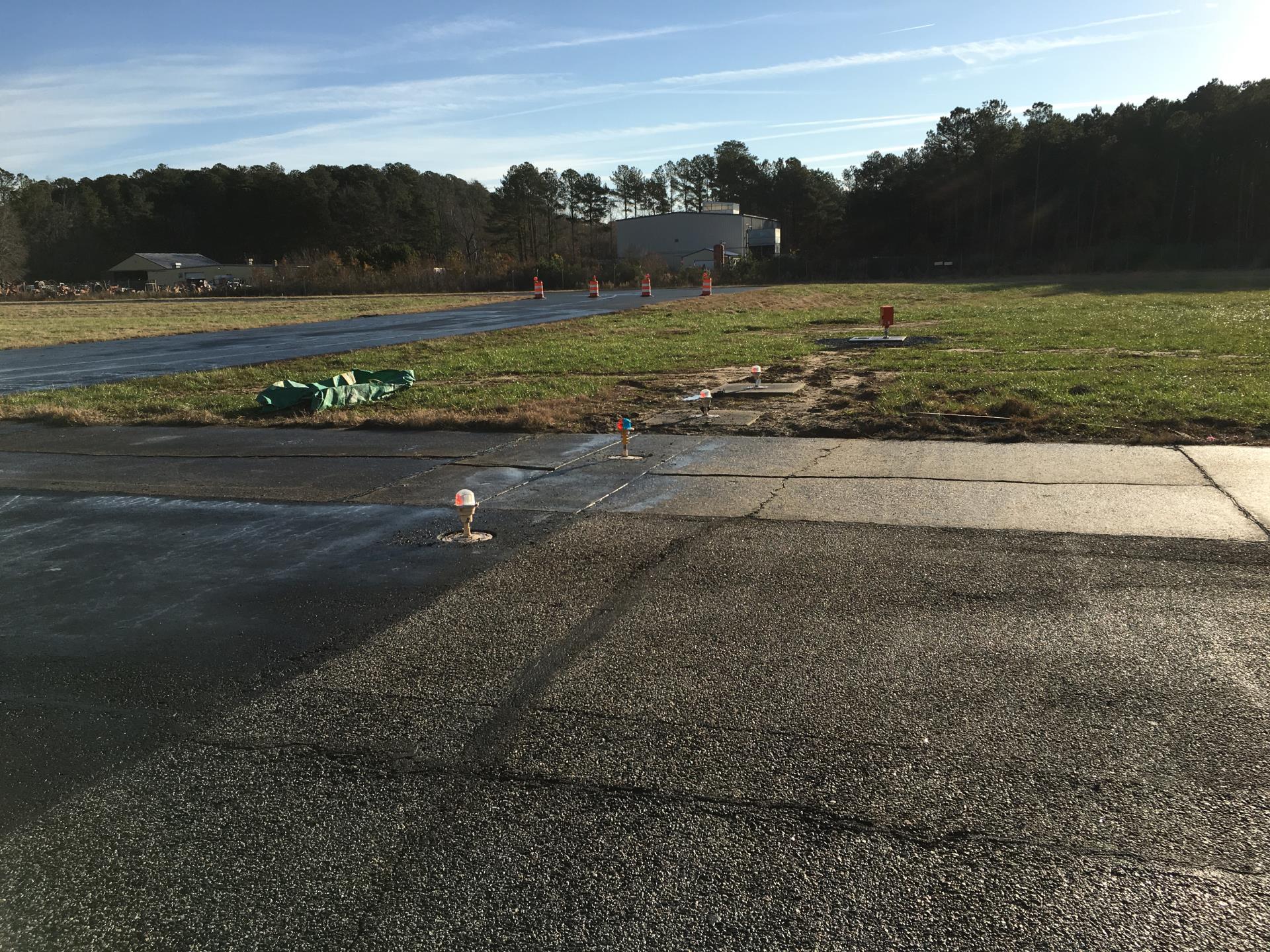 Work on the runway lighting continues.   The PAPI (Precision Approach Path Indicator) concrete pads are in place, wired and relocated to meet the current FAA specifications.   The PAPIs are a visual aid that helps pilots acquire and maintain the correct vertical approach to an airport and have a visual range of at least 3 miles during the day and up to 20 miles at night.  The foundation and wiring has also been completed for the REILS (Runway End Identifier Light System).    The REILS system provides rapid and positive identification of the end of the runway and consists of two synchronized, unidirectional flashing lights positioned on each corner of the runway landing threshold, facing the approach area and aimed at an angle of 10 to 15 degrees.  The REILS also have the same visual range as the PAPIs.   Both NAVAID systems will be upgraded to LED.

A scratch course has been applied to the entire length of the runway center-line to even out the surface irregularities prior to installing the fabric and the production paving.

Fabric is placed on the entire runway prior to paving to help prevent reflective cracking, which results from the contraction and expansion in the concrete beneath the asphalt surface.  Freezing temperatures and thawing, as well as ground water, impacts concrete movement and causes cracks to form.  The fabric creates a barrier between the concrete and the asphalt so that the movement underneath does not impact the surface above.   There are also 18 strip drains along both sides of the runway to move ground water away from the pavement into the drainage ditches.

Once the project is complete, approximately 56,000 square yards of fabric and 16,000 tons of asphalt will be installed on the runway surface.  Production paving is scheduled to begin this week. 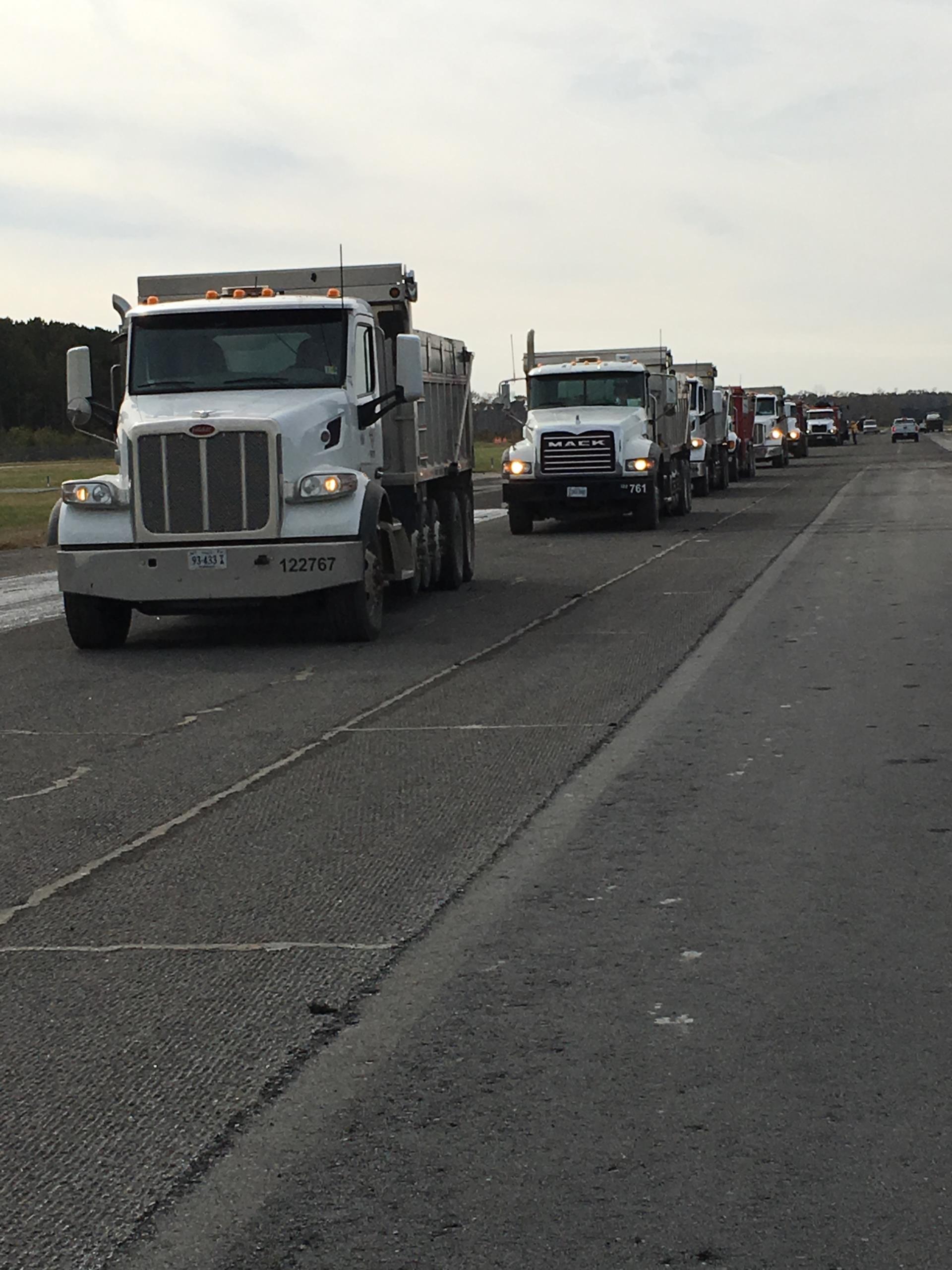 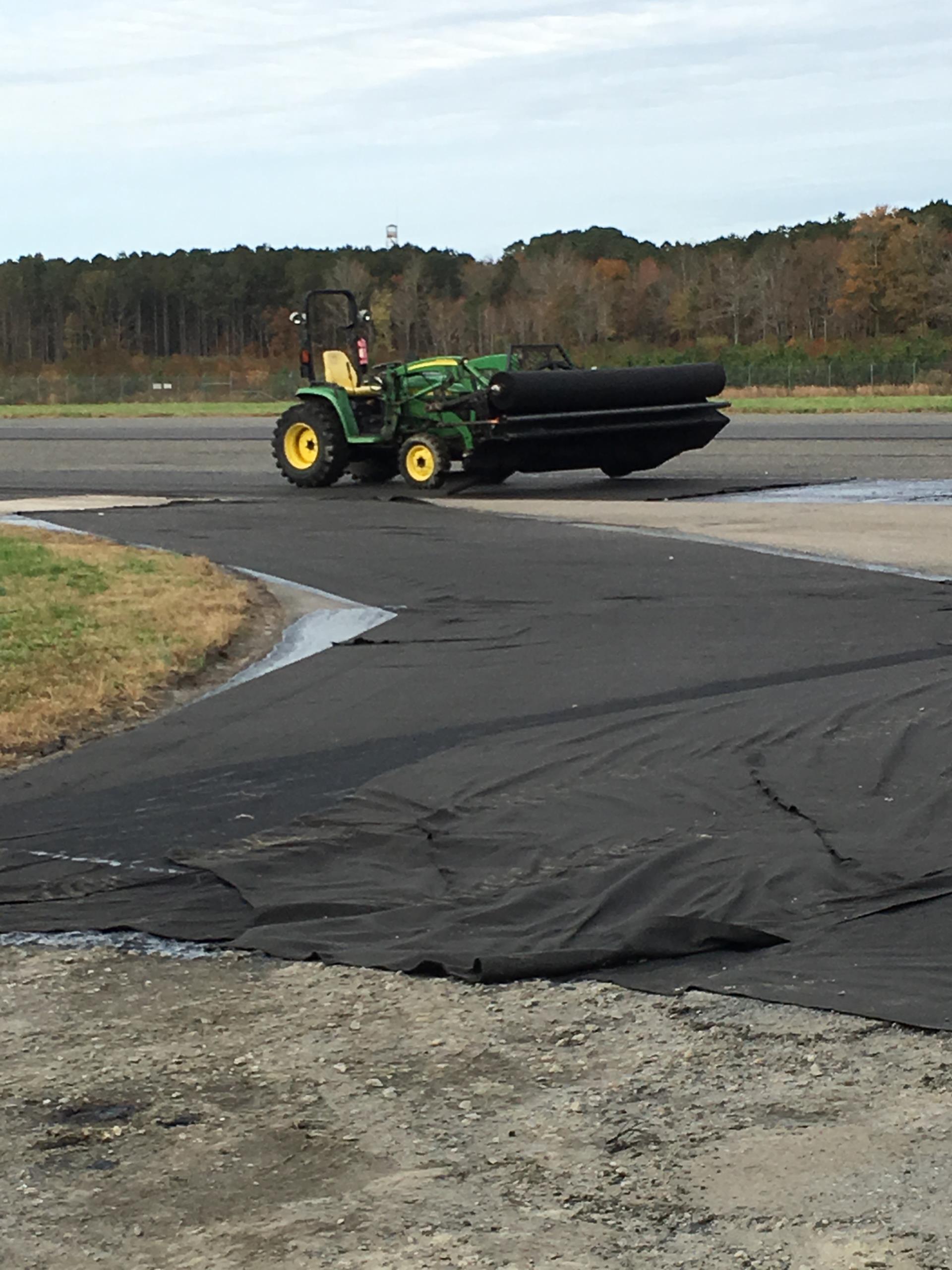 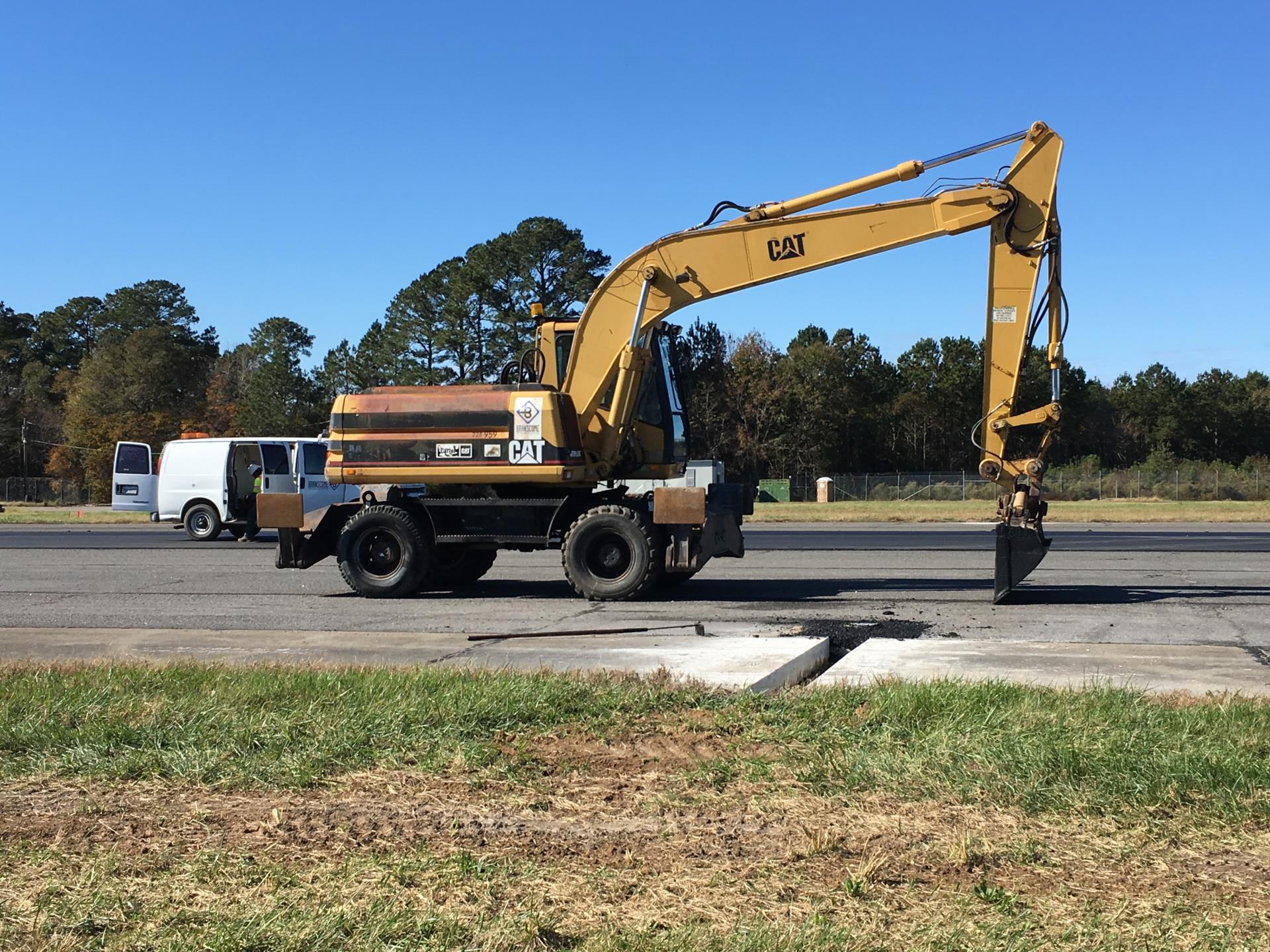 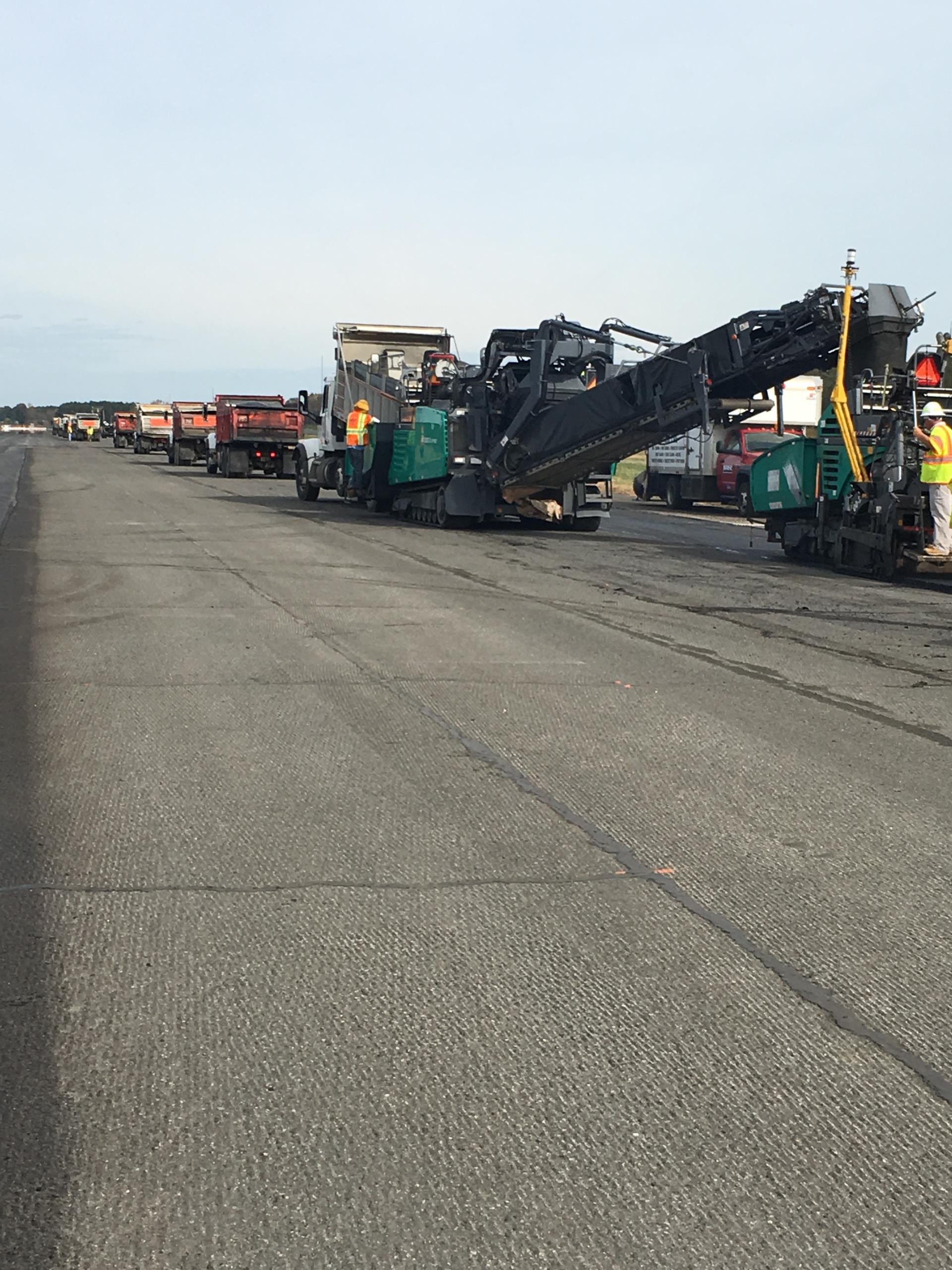 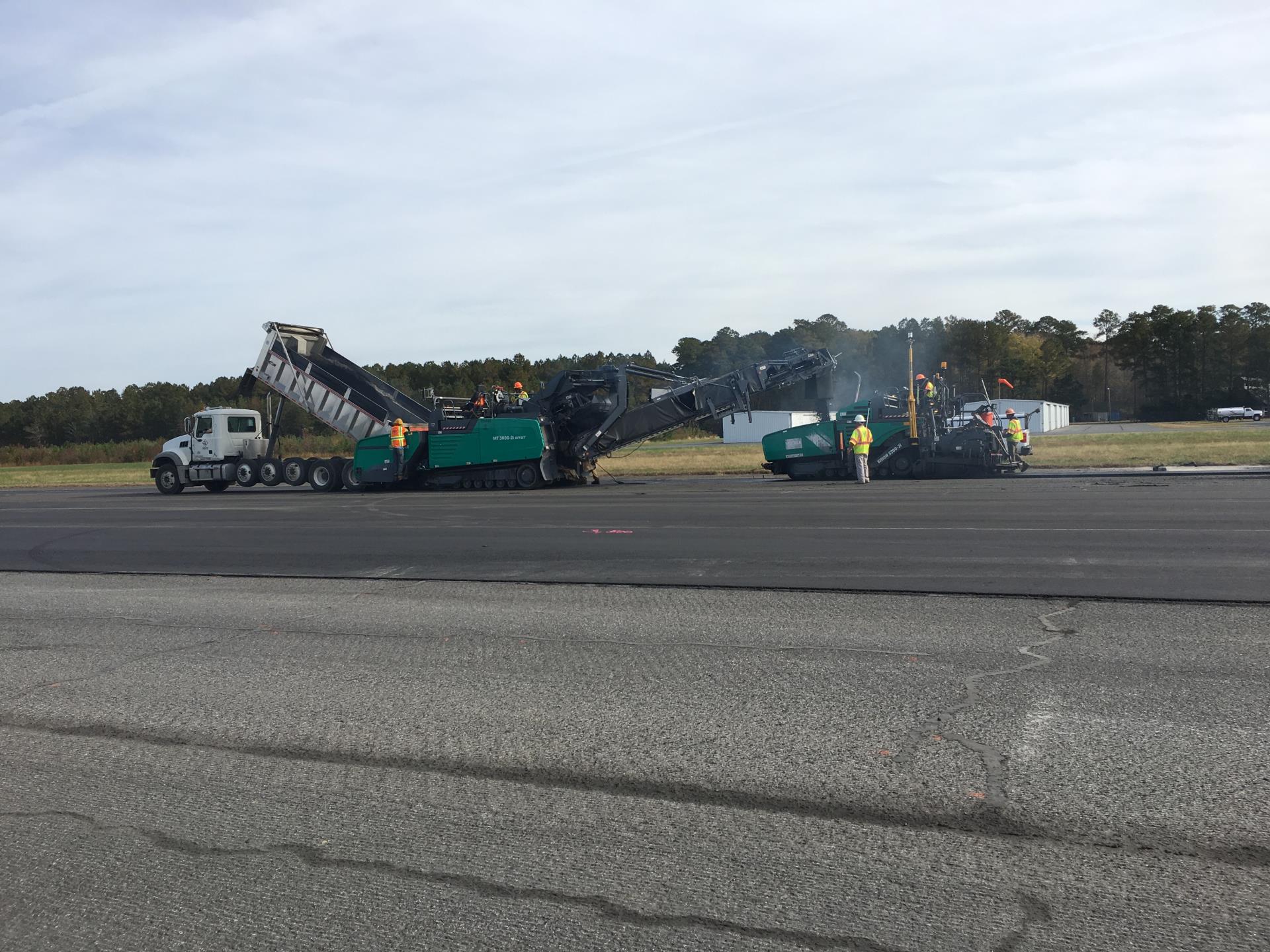 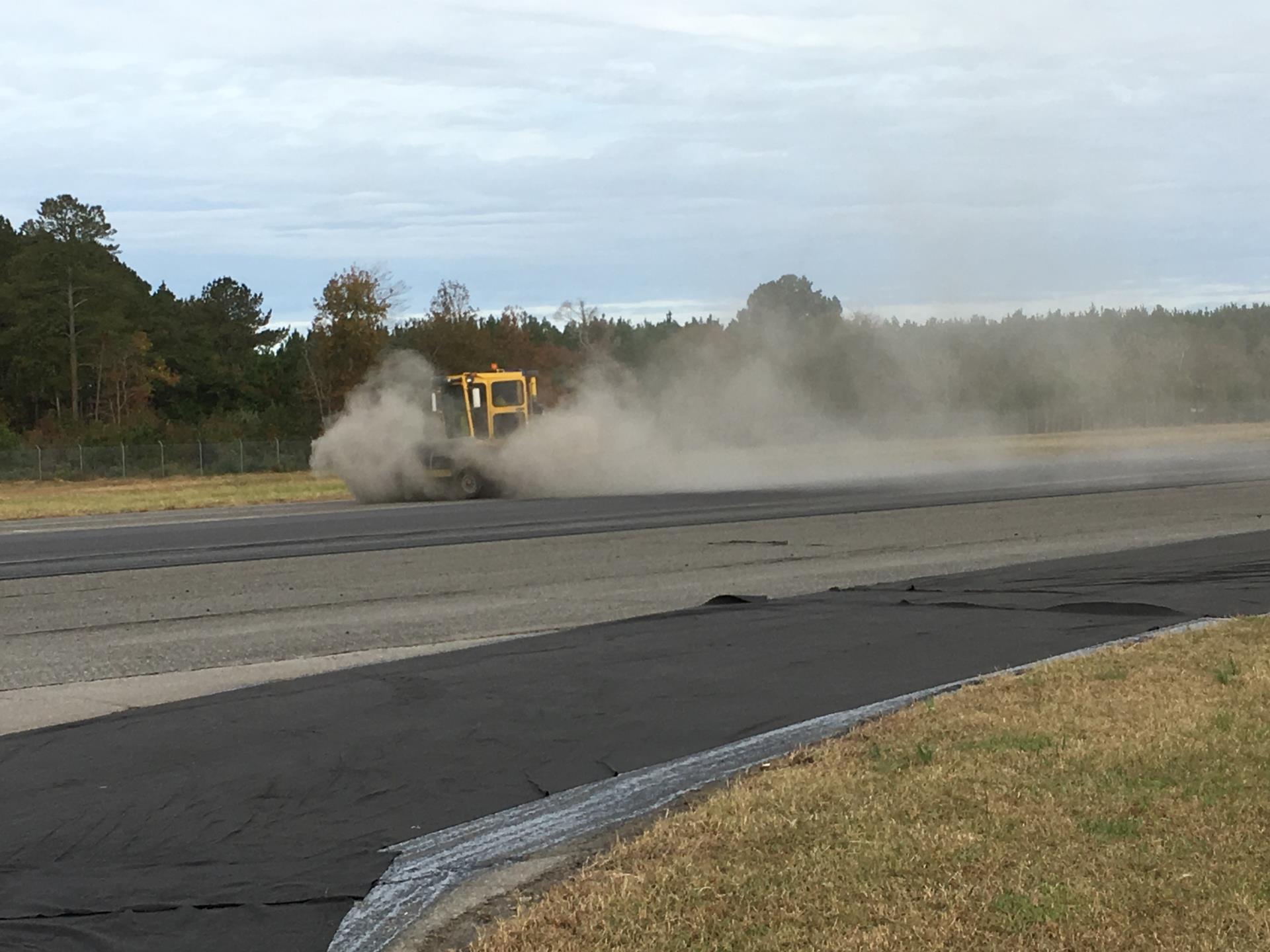 Milling operations continued throughout the week of Oct. 15-19 with 80% of the milling completed.  Approximately 57,000 square yards of millings have been hauled for recycling.   Public Works was able to acquire and transport several truckloads to improve the roads at the South Transfer Station and the North Land Fill. All the existing wiring for the runway lights and NAVAIDs has been removed and the new wiring is approximately 70% complete. The sections of runway that had been milled were swept for any residual debris before the crack seal was applied. Roughly 70% of the crack sealing is done and should be completed by the end of the week. . Once the crack seal is complete, an overlay fabric will be installed on sections of the milled/crack sealed pavement along with a tack coat to bond the fabric to the milled surface. An asphalt test strip approximately 300’ long x 24’wide was completed at the end of last week.  Roughly 135.62 tons of asphalt was applied, three and a half to four inches thick in the test area.  The asphalt mix met FAA requirements and runway paving is expected to begin the week of October 29. 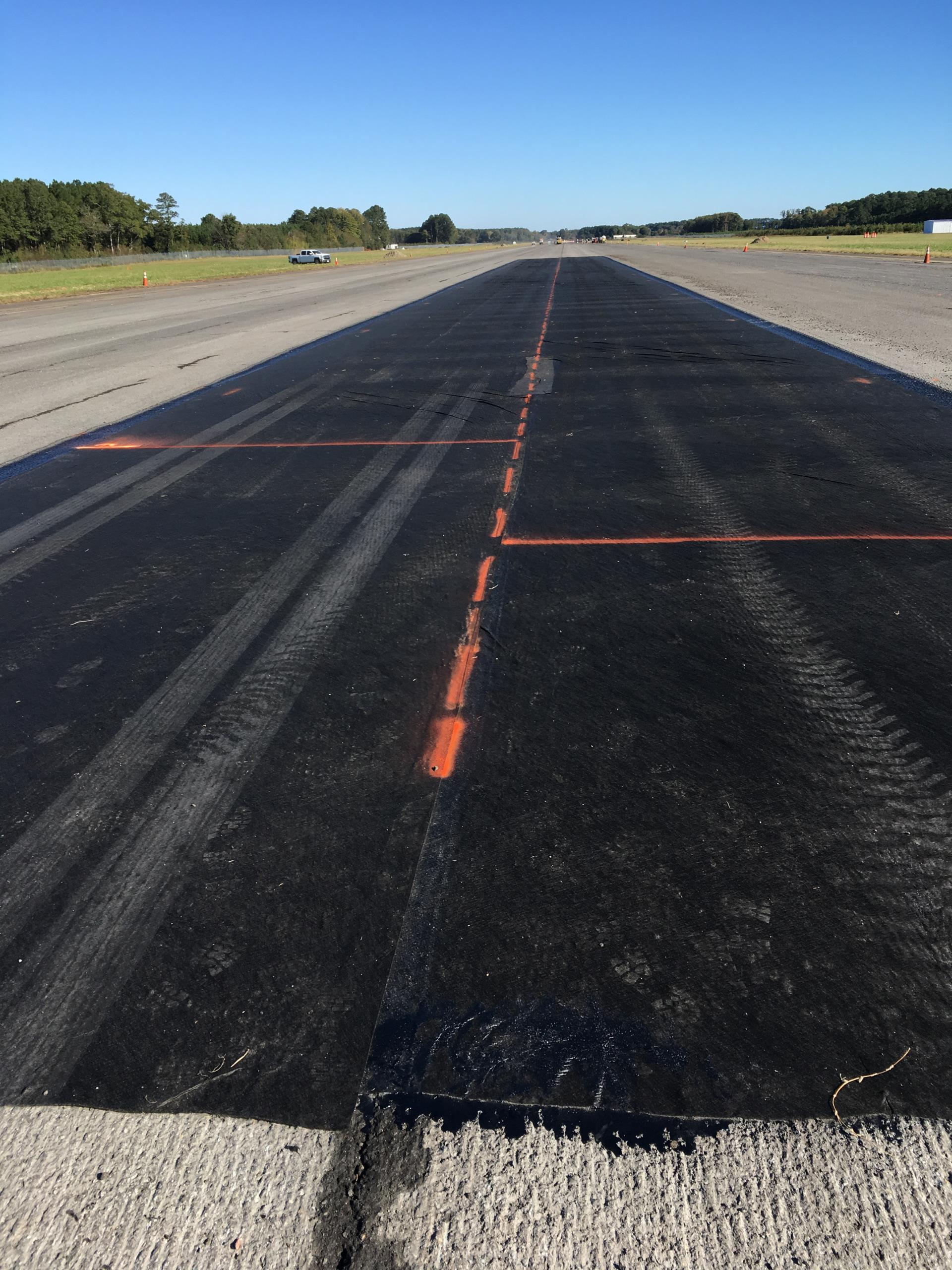 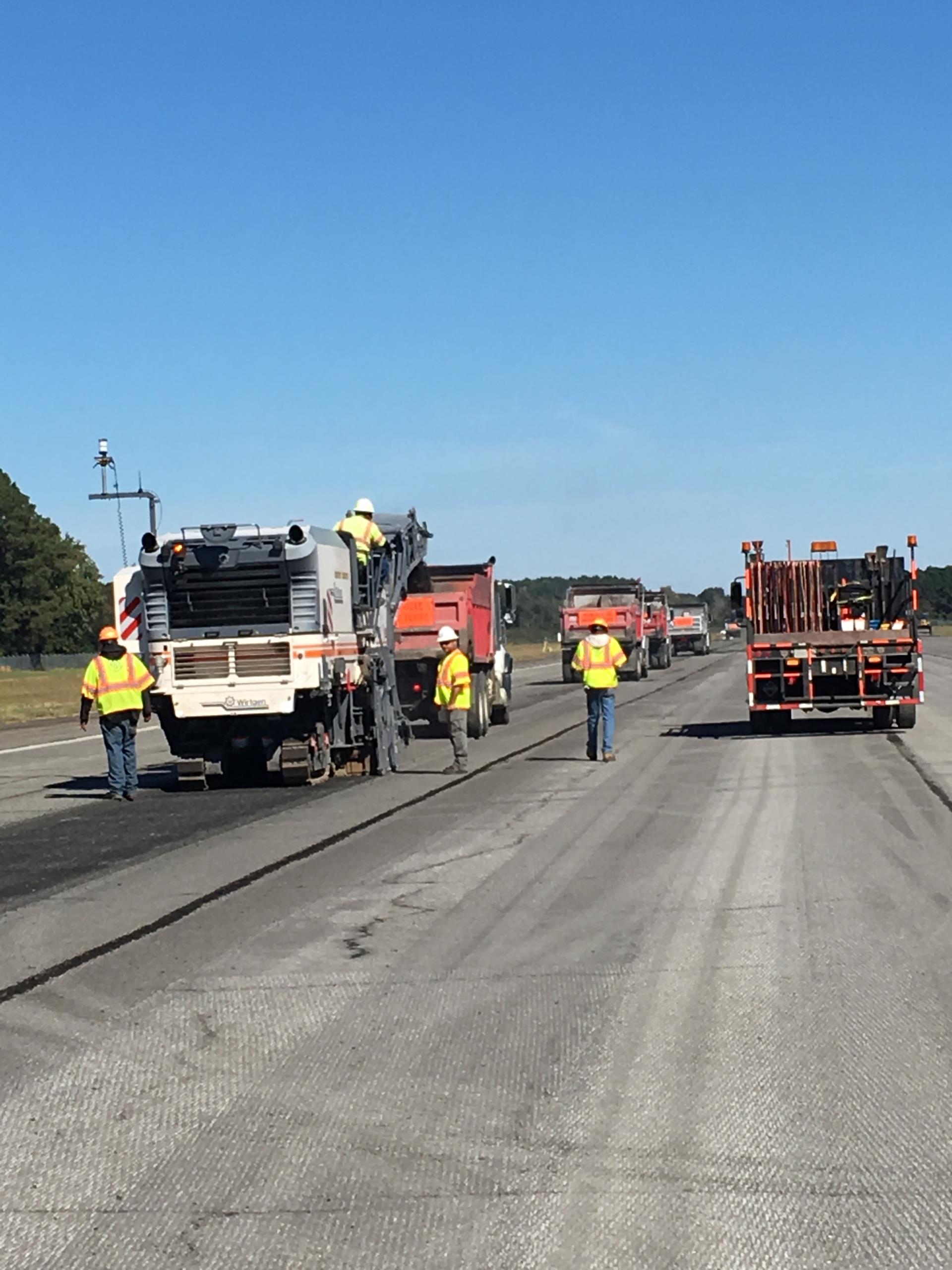 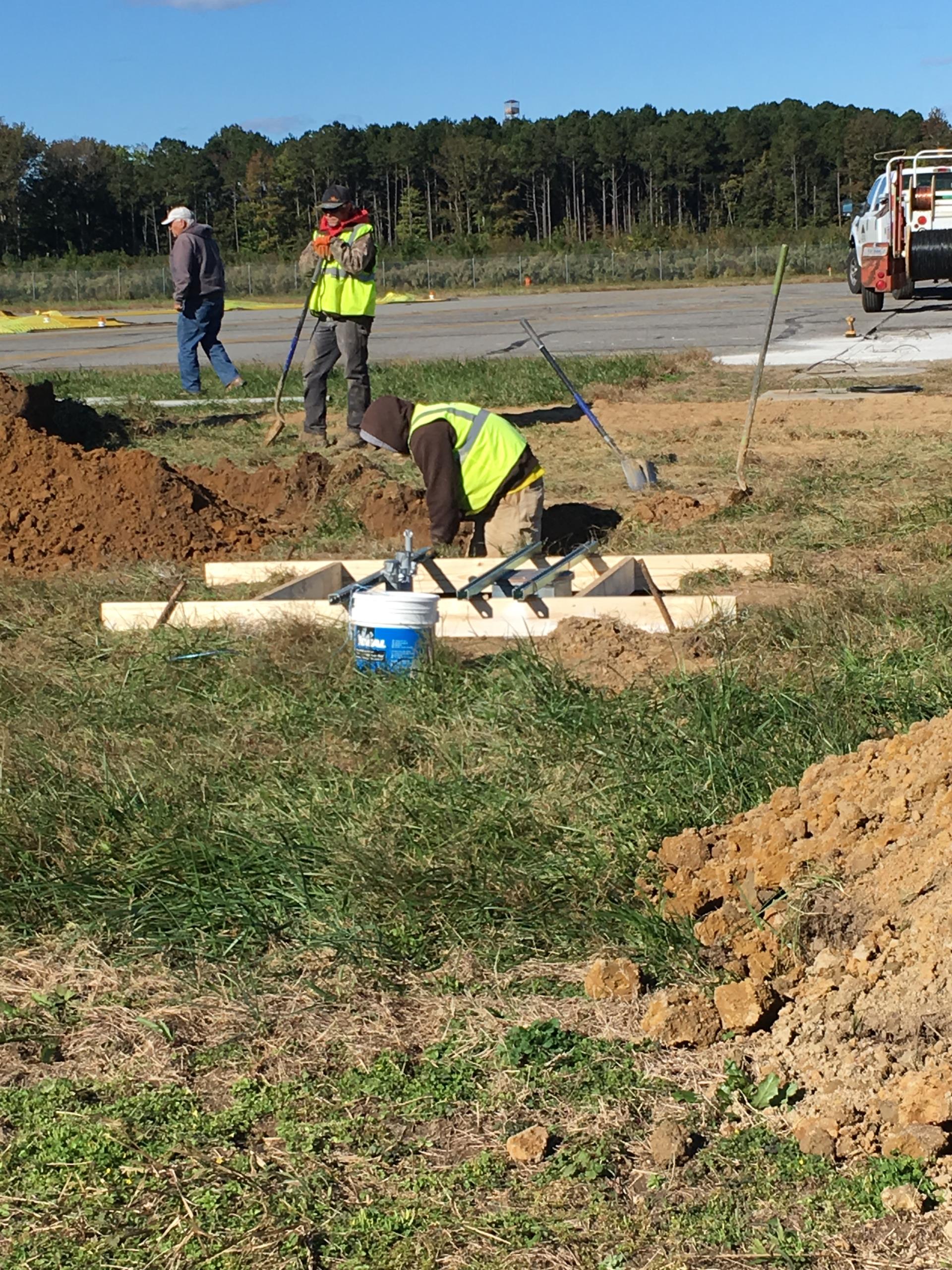 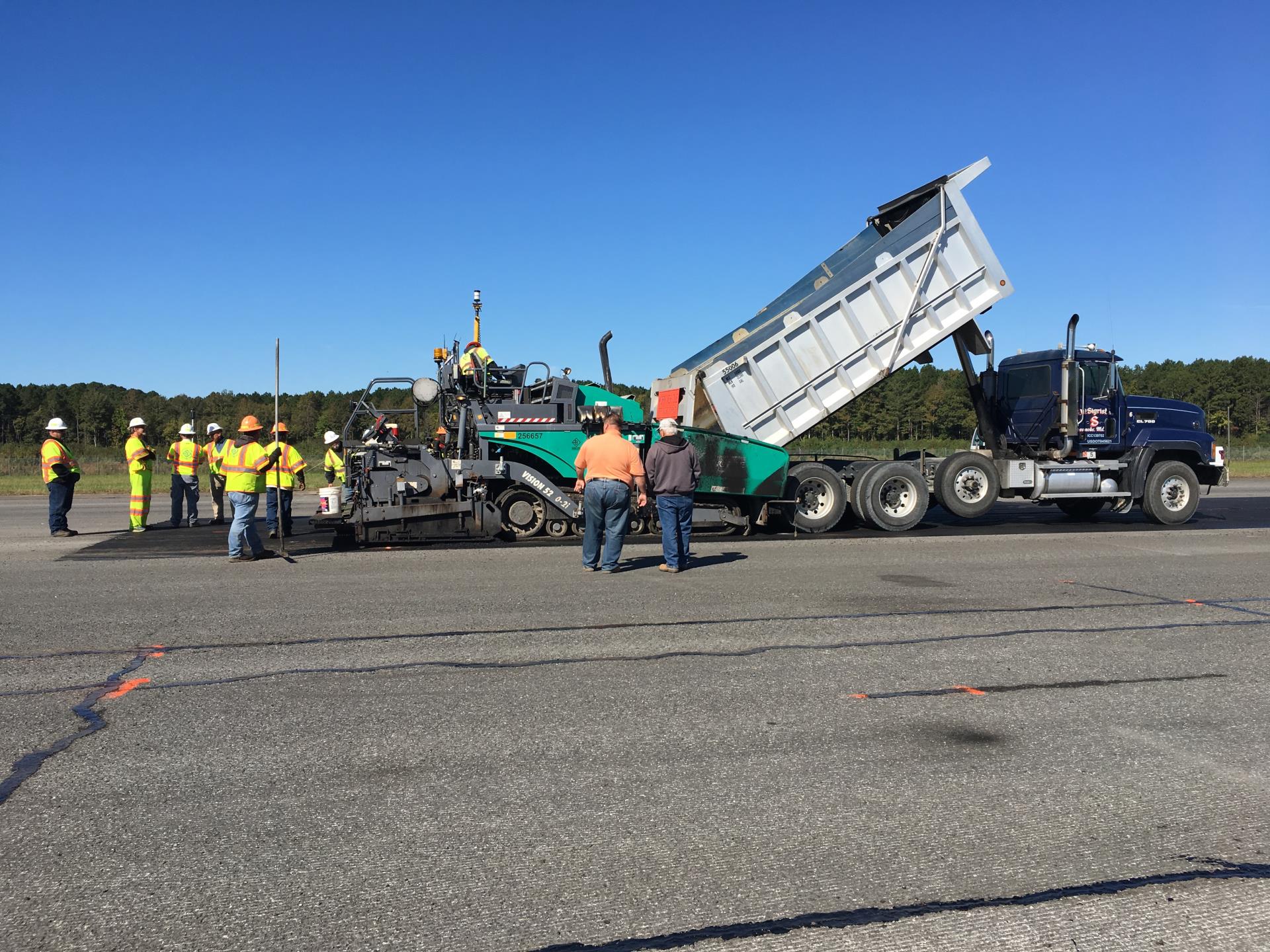 10.10.2018 - Construction began at the Accomack County Airport on Monday October 8.   During the pre-construction meeting, the contractor proposed reducing the construction timeframe from 120-days to 60-days by eliminating the first 60-day phase of construction where 2,000-ft of runway would be available for take-offs and landings.   Several factors were considered, including the impact on aircraft operations and revenues as well as the overall project cost savings.  The Airport tenants and users were polled, with the majority supporting the shortened construction period.   Once the FAA and the Virginia Department of Aviation (DOAV) approved the shortened construction timeframe, County officials accepted the contractor’s proposal.

A Notice to Airmen (NOTAM) was issued Saturday announcing the runway and partial parallel taxiway closure that would go into effect Monday morning.   X’s with solar lighting were placed over the runway- end designation numbers signifying that the runway is closed.  Low profile barricades and traffic drums were placed at the taxi-stub and taxiway entrances, traffic drums with solar barricade lights were placed on either side of the localizer equipment, and the runway light fixtures were removed and covered.   By early Wednesday morning, milling operations began. 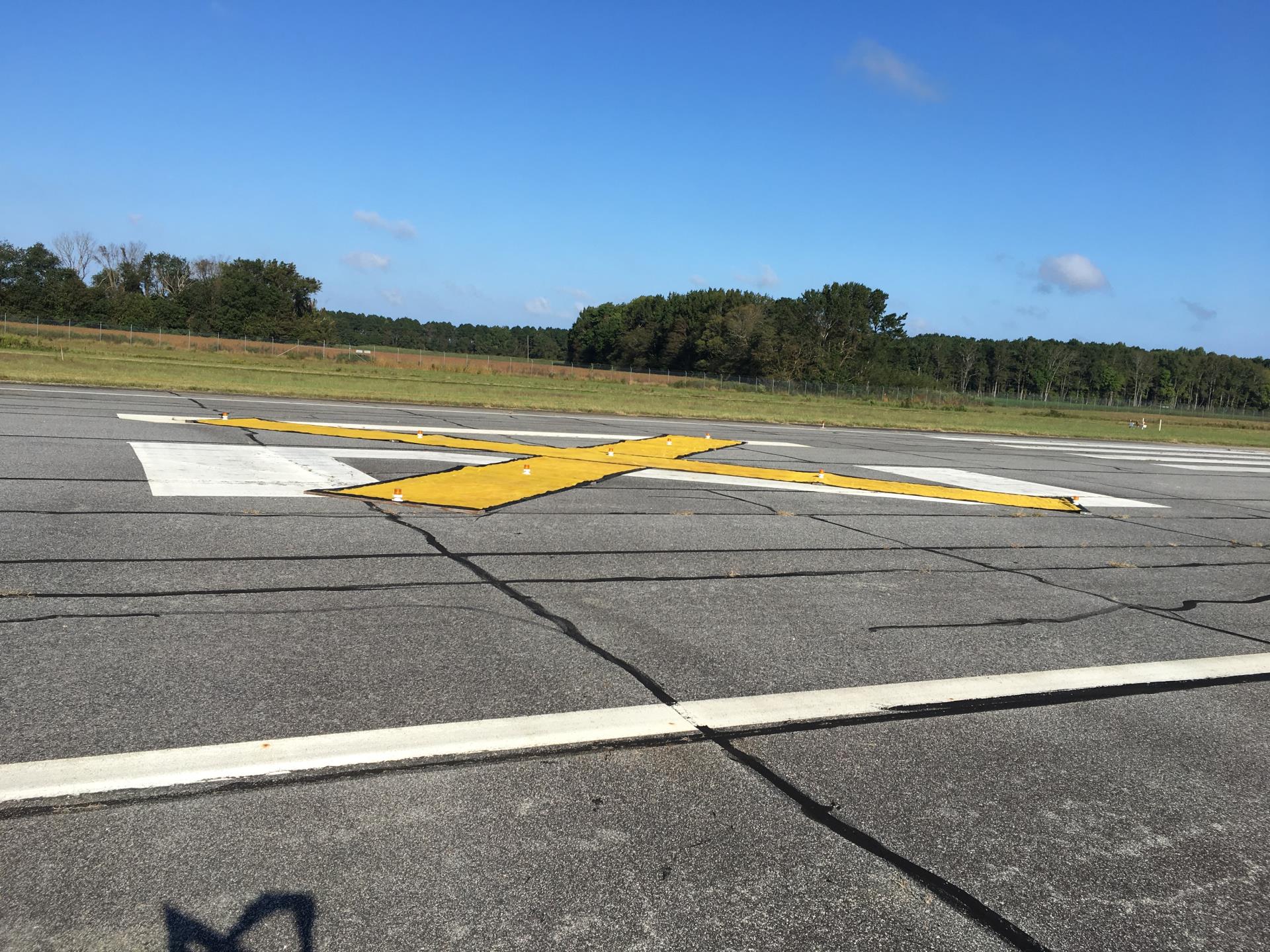 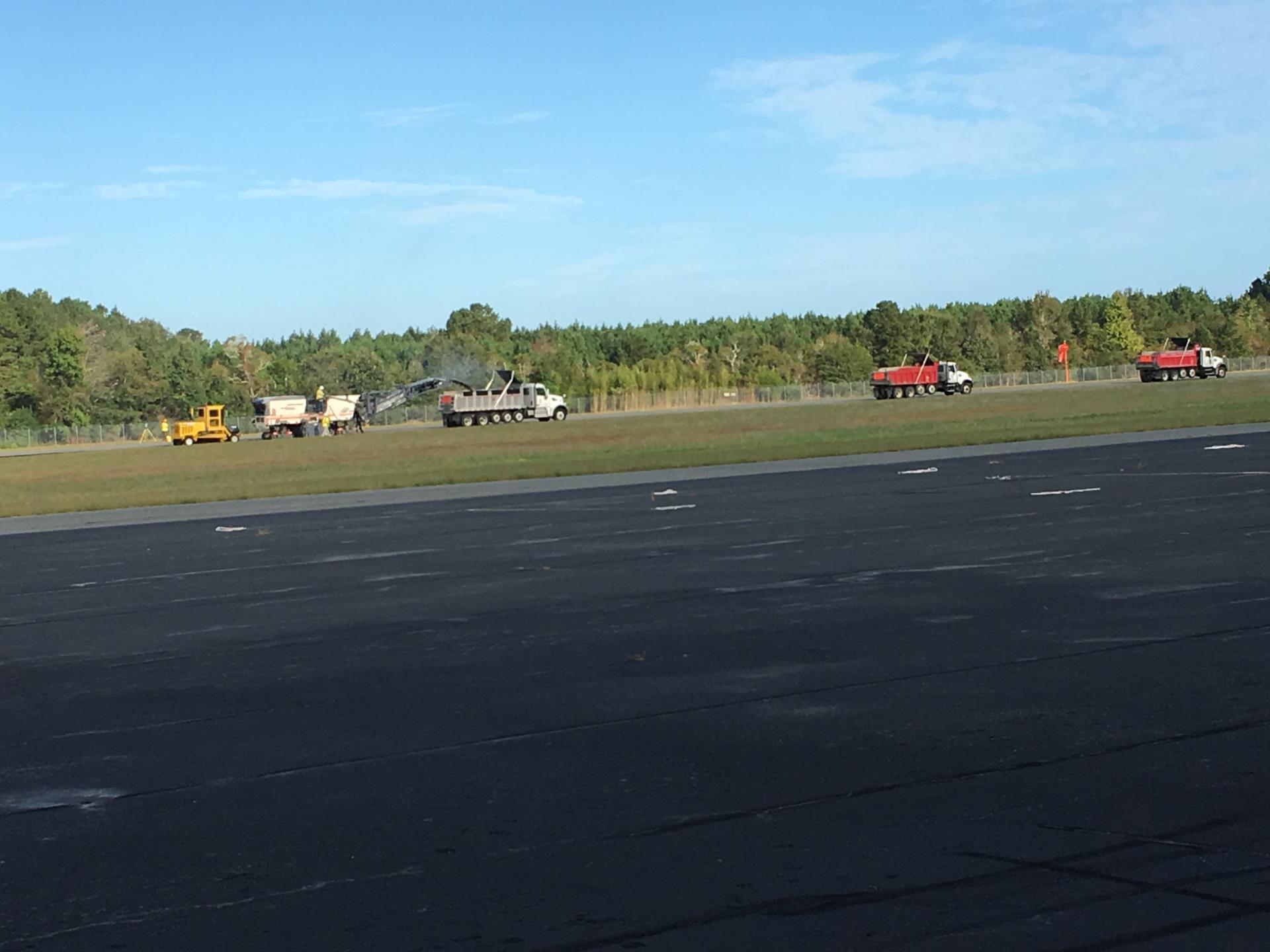 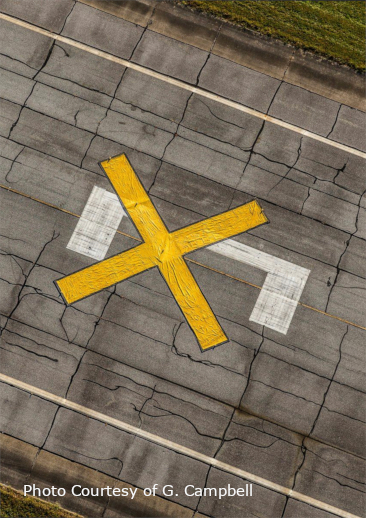