The Coastal Barrier Resources Act (CBRA) of 1982 and subsequent amendments designated largely undeveloped coastal barriers along the Atlantic, Gulf of Mexico, Great Lakes, U.S. Virgin Islands, and Puerto Rico coasts as part of the John H. Chafee Coastal Barrier Resources System (CBRS). The designation made these areas ineligible for most new federal expenditures and financial assistance. The legislation was designed to conserve the rich ecosystem of coastal barriers that are prone to hurricane and major storm events. Designated areas can be developed, but no federal funds may be used; the cost must come from all private sources. 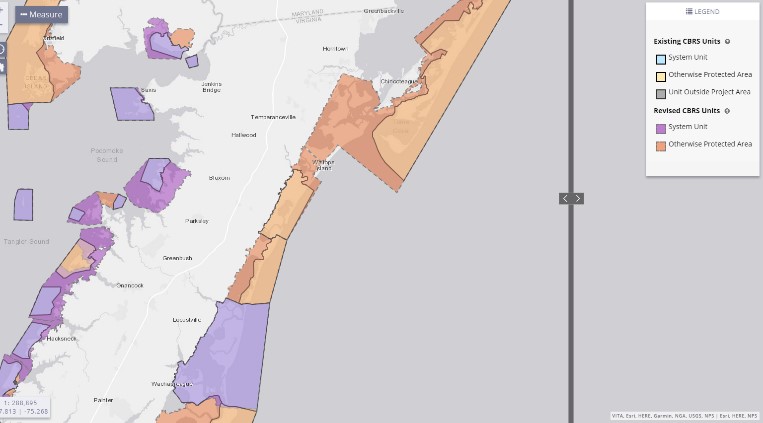 The U.S. Fish and Wildlife Service (Service) has prepared draft revised boundaries that propose modifications to the CBRS in several states, including Virginia. In December 2018, the Service announced a 120-day public comment period on the draft revised boundaries affecting Virginia. A public webcast meeting was scheduled for Virginia and Maryland on January 31, 2019, but was cancelled due to the partial government shutdown. In lieu of these meetings, a recorded presentation will be available on the Service’s website  by the middle of February that will give an overview of the remapping project. The public comment period will close on April 17, 2019. The revised CBRS boundaries (including proposed removals and proposed additions) will only become effective once the revised maps are adopted into law by Congress.

The US Fish and Wildlife Service announced a 120-day public comment period on the draft revised boundaries of the CBRS including for those in Virginia. A public webcast meeting is scheduled for Virginia and Maryland on January 31, 2019 and the public comment period will close on April 17, 2019. Learn more.

For the immediate future, CBRS flood insurance prohibition maps will only be available via the US Fish and Wildlife CBRS Mapper, downloadable shapefile, We Map Service and ARC GIS Representational State Transfer Service. Learn more The CBRS Mapper includes a function that allows users to create their own documentation for specific properties and project sites. The Mapper also includes the relevant dates for flood insurance determinations and other purposes. Learn more